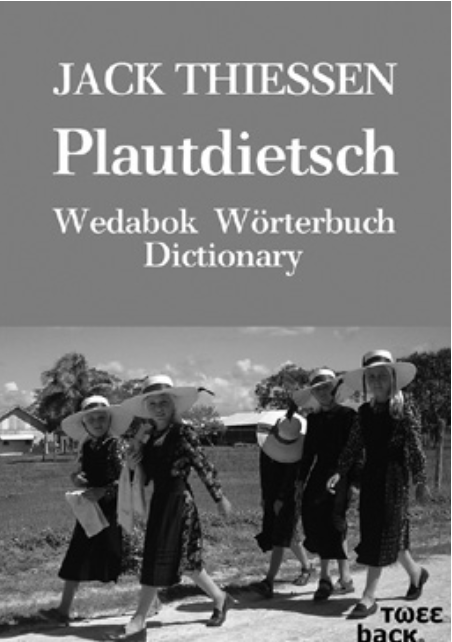 I have long enjoyed Jack Thiessen’s Mennonite Low German Dictionary / Mennonitisch-Plattdeutsches Wörterbuch. I purchased a copy of the first edition shortly after it came out in 2003. I have enjoyed learning about Plautdietsch grammar and the history of the language, and I continue to occasionally page through the dictionary, randomly picking words to see whether I know them, what they mean, and how to pronounce them. I suspect many readers of Preservings who own the dictionary do so as well to maintain a connection to the language of their family and people.

But I have also been using Plautdietsch dictionaries on and off for a long time in my work, whether I am reading or trans- lating Plautdietsch material, or transcribing Plautdietsch interviews. Over the years, I have relied primarily on Thiessen’s dictionary and Ed H. Zacharias’s Ons Ieeschtet Wieedabuak. They have different word lists, which means together they are much more substantial resources. Those who have no knowledge of Plautdietsch and those who are fluent, will, undoubtedly, use this dictionary differently than I do.

But its usefulness and importance are not in question.

Thiessen hopes this work will be a “definitive dictionary” (xxv) and claims to have consulted all “Low German dialect dictionaries.” But the word list in Tweeback Verlag’s Plautdietsch would indicate otherwise. It has incorporated words from Zacharias’s dictionary and Adi Stöckl’s Huachdietsch- Plautdietsch Rejista “so that not only the European and Canadian, but also Latin American Plautdietsch, were given con- sideration” (9). Although in doing so, it omits words from Thiessen’s earlier editions, this is a welcome beginning to a more inclusive understanding of Plautdietsch in its entirety.

The first edition of Mennonite Low German had problems of consistency in spelling, alphabetization, and commentary; the number of errors is beyond belief. Although many of these have been corrected in the revised edition, I wish the Friends of Jack Thiessen, who published it, had been still more meticu- lous in their editing, as mistakes and inconsistencies remain.

The publisher of Plautdietsch has done a much better job in eliminating errors and making the dictionary more useable. It has removed the distracting apostro- phes that were used in Mennonite Low German to designate com- pound words, and consistently uses periods to separate the lan- guages in definitions. The fact that Plautdietsch invested in three editors to go over the word lists may account for this. Labelled as a fifth edition, in that it is the fifth publication of a Thiessen dic- tionary, Plautdietsch replaces the English-Plautdietsch part with a new German-Plautdietsch part.

These dictionaries are “a life’s work” and a “labour of love” (Plautdietsch, 9) on the part of Thiessen. I, for one, am extremely grateful for all the work that has gone into compiling and publish- ing these two dictionaries.