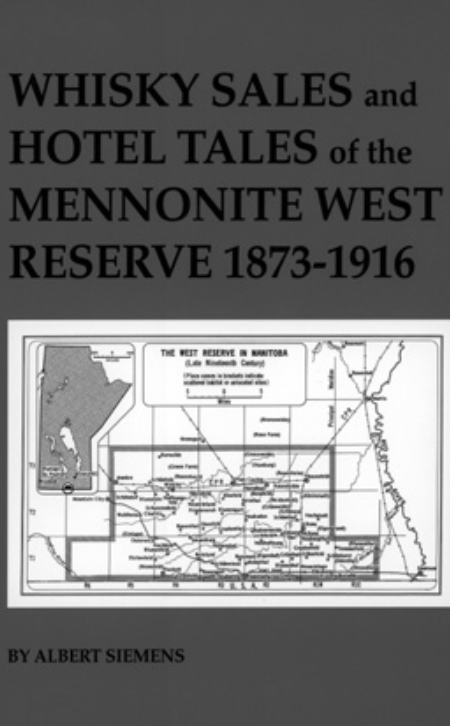 In Whisky Sales and Hotel Tales, Albert Siemens gives significant attention to a topic not often discussed in Mennonite scholarship, making a welcome contribution to the literature on the early years of Mennonite life in Manitoba. In this researched study, Siemens examines the hotels and bar rooms of towns in and surrounding the Mennonite West Reserve. To properly capture this regional history, Siemens covers neighbouring locales outside the West Reserve, such as Morden and Emerson, and even includes communities across the border in the United States.

Siemens’s methodology adds context and insight to our understanding of the early period of Manitoba Mennonite history. He examines a wide cast of persons, ranging from police officers, hotel owners, and politicians to smugglers in the frontier era.

Siemens covers not just the business and social aspects of hotels and alcohol sales, but the political and legal dimensions as well. Though the book’s focus is on the Mennonite West Reserve, many of the individuals featured are non-Mennonite. Mennonites in this period were not as insular as some might think. Siemens succeeds in both fine-grained research and situating Mennonites in the larger scope of Manitoba history.

Siemens challenges perceptions surrounding Mennonites and alcohol. In a chapter examining Mennonite mores, he traces involvement with alcohol as far back as their sojourn in Poland, where Mennonites were known for their brandy making. In Russia, they received the express right from the Tsar to brew beer, and when Mennonites moved to Paraguay from Canada in 1927, they negotiated that alcohol could not be sold within a certain distance from the colonies. That Mennonites have tended to abstain from alcohol and shy away from its consumption and production has been a relatively recent phenomenon. Siemens examines changes in Mennonite norms about alcohol, and in the process dispels long-held misconceptions.

The strengths of Siemens’s work lie in its rigour and sheer amount of detail. The book covers a considerable geographic area over a period of more than four decades. Through exhaustive research, Siemens brings new sources to light. Siemens is uniquely qualified to write on this topic, having first- hand experience running a hotel in the town of Winkler, where he encountered local opposition to his efforts to gain permission to sell wine and spirits in its bar.

The book does have its flaws. Though it presents itself as a serious historical study, it could be more accessible to the general reader. There are several instances where lengthy paragraphs and sentences could be shortened to assist with the flow of the text. As well, the organization within the book might be improved with more subsections, indentations, and visual cues. This would help the general reader follow Siemens’s detailed account.

There are also some typos and inconsistencies within the text that might have been avoided by more copy-editing. For example, the town of Carman is misspelled as Carmen, and the same person is referred to as both a Member of Legislative Assembly and, incorrectly, as a Member of Provincial Parliament. The inclusion of an index would have been a welcome addition, too.

This is an important contribution not only to Mennonite history, but Manitoba history as well, offering an enhanced understanding of the Manitoba in which Mennonites arrived as immigrants, and subsequently partook in fully as citizens.