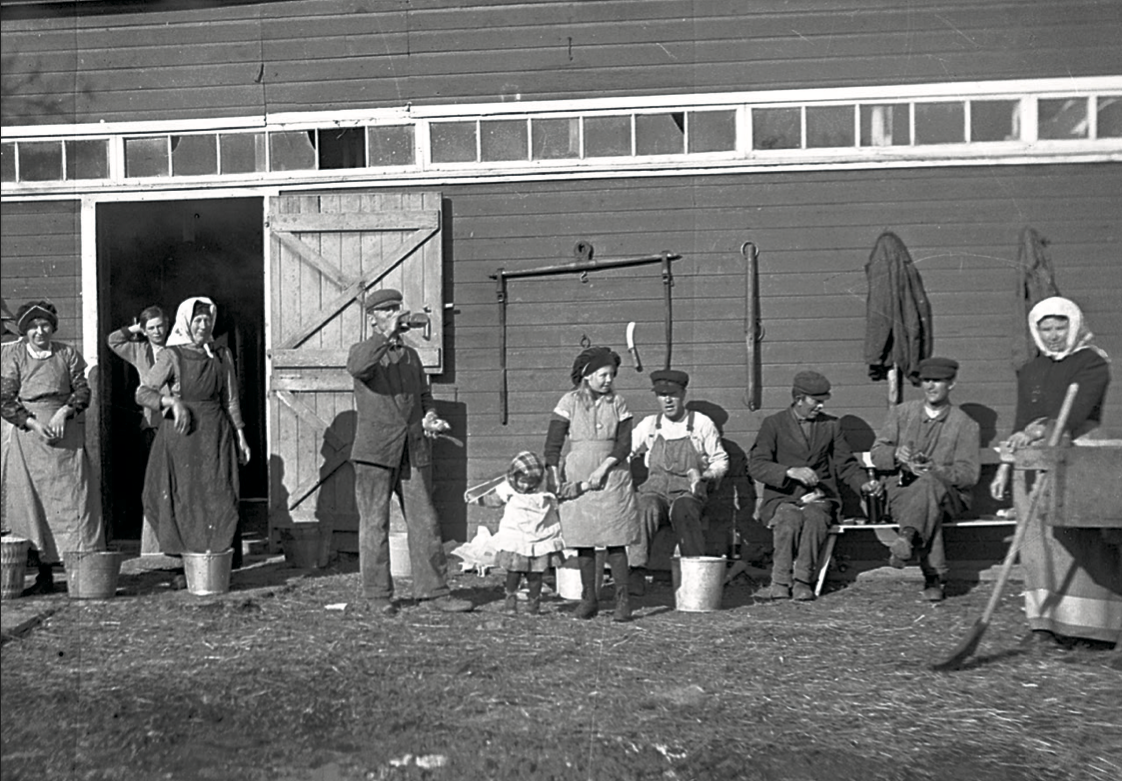 A survey of the collections at Mennonite Heritage Village (MHV) in Steinbach indicates Mennonites drank just about anything.

Glass and ceramic bottles, even in a broken form, provide us with key information about the drinking habits of past societies. Historic Manitoba Mennonite communities are no excep- tion, and collections from heritage institutions allow us to peer beyond the rhetoric around drinking, and look dir- ectly at the drinks themselves. A survey of the collections at Mennonite Heritage Village (MHV) in Steinbach indicates Mennonites drank just about anything.1

The donors of the bottles in the MHV collection did not usually provide infor- mation about who drank what. Some donors’ hometowns were noted, however, and they include Blumenort, Kleefeld, and Steinbach. A collection of liquor bottle fragments were excavated from the former village of Blumenhof, a mile west of Blumenort. Alcohol consumption was evidently not limited to the Mennonite East Reserve, though, and photographs of drinking and thriving hop vines have been sourced to the West Reserve.

In the bottle collection at MHV, we see evidence of gin, port, vanilla extract, ginger beer, and wondrous medicinal elixirs, though consumption of other bev- erages cannot be ruled out. The bottles and their contents each have unique hist- ories, which link to certain time periods and practices.

Gin was often delivered in olive green “gin case bottles,” which had a distinctive tapered appearance with squared sides, for efficient transportation in cases of twelve. Examples from the MHV collection can be dated to 1870–1920 (images 1, 2). These bottles could also contain other spirits, but gin was the most common.

One bottle of Gibley’s gin that likely dates to the 1960s was prescribed by a Dr. Bernier to one Mr. Enns, and pur- chased from the Steinbach pharmacy of McAdam and Selley (image 3). What condition was being treated remains unknown, and the pharmacist’s directions state only “As directed.” Centuries ago, gin was thought to treat kidney ailments.

Ginger beer bottles are simple earthenware ceramic vessels, and are well represented in the collection. Fragments were also found at the Blumenhof archaeological site from a bottle made by Doulton, in Lambeth, England (image 5). The alcohol content of ginger beer dropped from a high of 11 percent in the early 1800s to as low as 2 percent by the early twentieth century, when it was particularly popular in Canada. In 1935 there were about a thousand ginger beer breweries in the country, including the E. L. Drewry brewery in Winnipeg (image 4).

Wine is represented in the collection by two large Bright’s glass jugs (image 6). These held port (20 percent alcohol), which was used as communion wine in a Steinbach church. Bright’s was established in Ontario in 1874, and by 1920 it was the largest wine producer (port and sherry only) in the British empire, producing over four million gallons a year. MHV also holds a beautiful wine decanter, decorated with blue, yellow, and white points of paint (image 7). It was given as a gift to a Mennonite woman from a relative in Steinbach in 1905.

Vanilla extract, a common baking ingredient, had an alcohol content of up to 34 percent. Though it is impossible to determine exactly how it was used in the household beyond baking, it was an easily accessible source of alcohol (image 8).

Finally, patent medicines were a source of alcohol for the whole family. The products seen in the extensive collection at MHV range from 14 percent alcohol (Forni’s Alpen Kraeuter, a very popular stomach remedy – image 9) to 69 percent (Rawleigh’s Anti-Pain Oil, for internal and external use, with instructions on how to administer it to children – image 10). Patent medicines were not actually patented of course, since this would require scrutiny of their contents, often dangerous or simply ineffectual. Patent medicines waned in use by the mid-twentieth century after rigorous tests and public exposure forced the removal of alcohol, cocaine, and opiates from the products.

There are many kinds of bottles in the collection, including large ceramic jugs with cork stoppers, clear glass hip flasks, and dark brown or green round bottles (images 11–14). Nearly any alcohol could be stored in these containers, either home- brewed or purchased.

Beyond the museum collection, the Neubergthal National Historic Site provides other evidence of local alcohol production and consumption. Hops, a common ingredient in beer brewing, have been growing in Neubergthal for many decades, although their particular variety is unknown (image 15). Two photographs from the Peter G. Hamm collection depict consumption of alcoholic beverages in Neubergthal. One photo shows two local youth, Jakob Funk (left) and Dietrich Loewen (right), clinking glasses while holding clear glass liquor bottles and cigars (image p. 7). The other shows a local October Schwienschlachte, a hog butchering event, in which two clear bottles with dark liquids are in evidence (image p. 2). This is likely a type of brandy. Liquor bottles, some partially full, were also found within the walls of the Friesen Housebarn (now restored), and several wooden crates of liquor and beer bottles were found in the attic of the Herdsman House.

From the evidence in these collections, it seems alcohol was used widely in Mennonite communities for a number of purposes: casual drinking, either private or public (gin bottles, ginger beer bottles, beer bottles, wine decanter, hops, and other liquor bottles); communion (Bright’s jugs of port); self-care (labelled patent medicine bottles); and baking (vanilla extract bottles). Of course, any of the religious, medicinal, or baking sources of alcohol could also be sampled on a casual basis. As with any museum collection, these bottles are only a tiny and likely incomplete sample of the quantities and types of alcohol used by Mennonite villagers of the past.

1. Thank you to senior curator Andrea Klassen at the Mennonite Heritage Village for access to the collections, and to Margruite Krahn and Herb Heinrichs for their contributions.